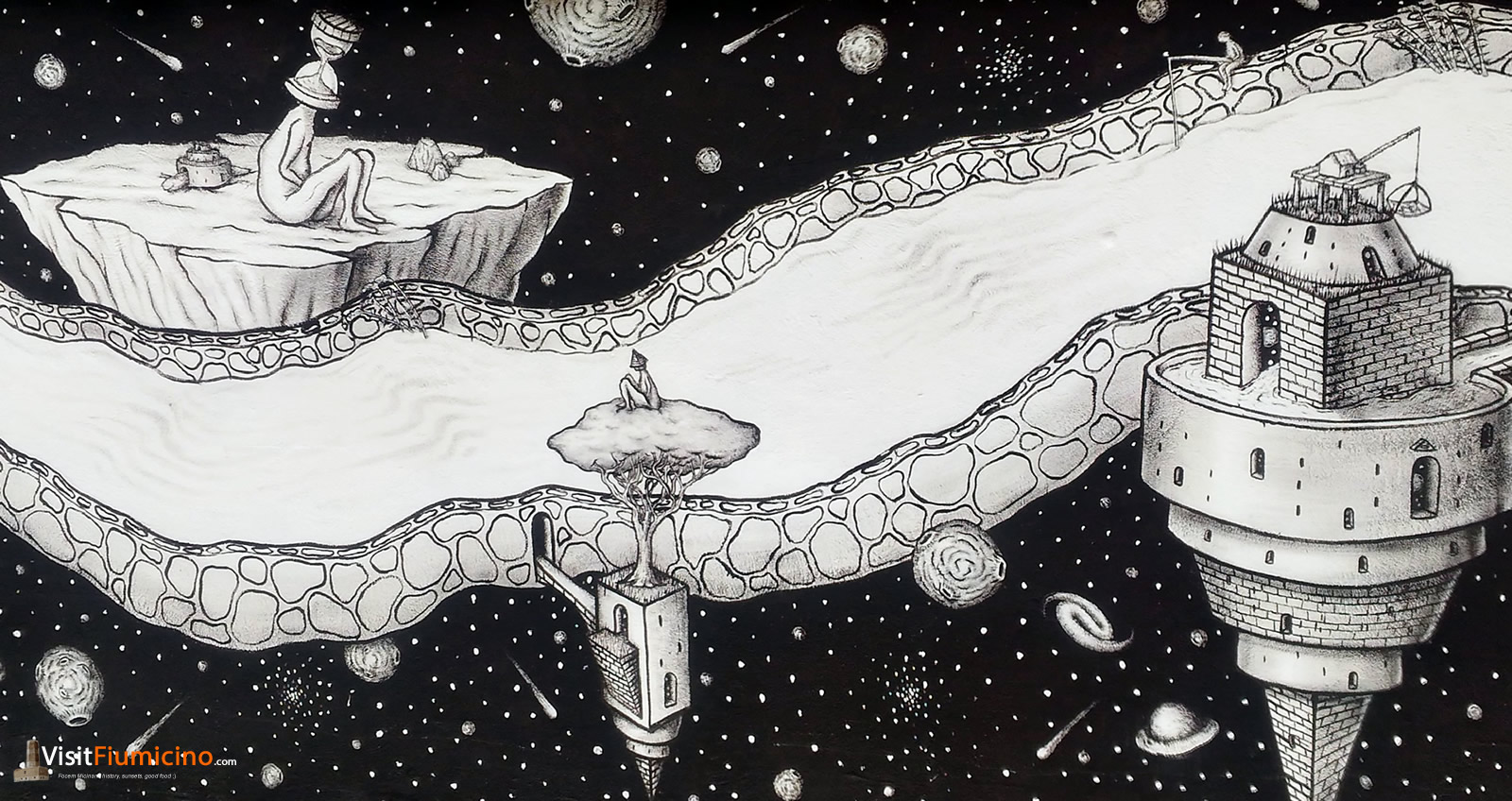 Along Sentinel Step among its narrow streets, hidden, intricate as a labyrinth of dreams and stones suddenly you come across a work of street art that immediately catches the heart and the look of the traveler.
This is the work of street art entitled "Favor the great Spanish artist Peri Helio (http://www.facebook.com/perihelium).

It is an impressive work, majestic, primordial but at the same time profound, dreamlike, metaphysics in which the territory of Passo della Sentinella and Fiumara Grande becomes under brushes.
Don't we find ourselves more in two dimensional space, surrounded by nature and the Sea made of water, salt and Earth but in a space of three dimensions, deep, timeless, where reality joins the imagination creating a dreamlike space where everything is floating : trees, rocks, sand and Bisou Bisou, true King of this territory.
But not only, with them fluctuate even dreams, hopes, fears, feelings of all the people who live here or who have left their heart and their soul.

In this sense, the work of Peri is not something dreamlike and metaphysical but tells the reality that surrounds us: does not illustrate the outside space, huge, deep, distant but the inner, emotions and feelings that, immense, are within us.

It's a striking and beautiful too.

This successful meeting between the artist and our territory is due to an invitation of the musician Mallahi, inhabitant of Passo della Sentinella, that in 2016 invited Peri to create his first work in our country.

To September 2016, after 7 days of intense work, the murals came to life giving us a piece of pure art and powerful that represents not only the mighty nature of our land but also its fragile as deep intimacy.

It is a precious gift that we must protect and preserve. 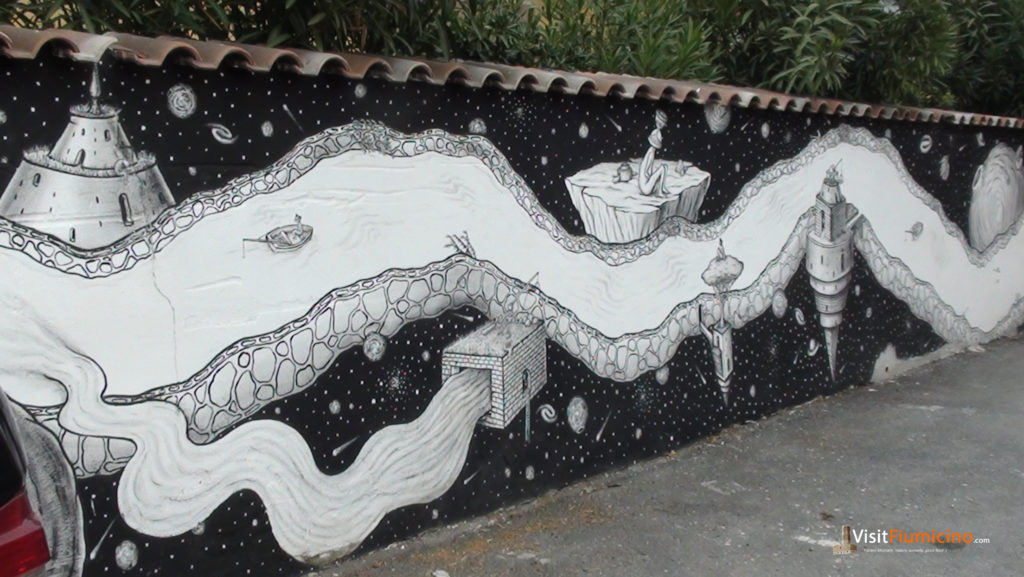 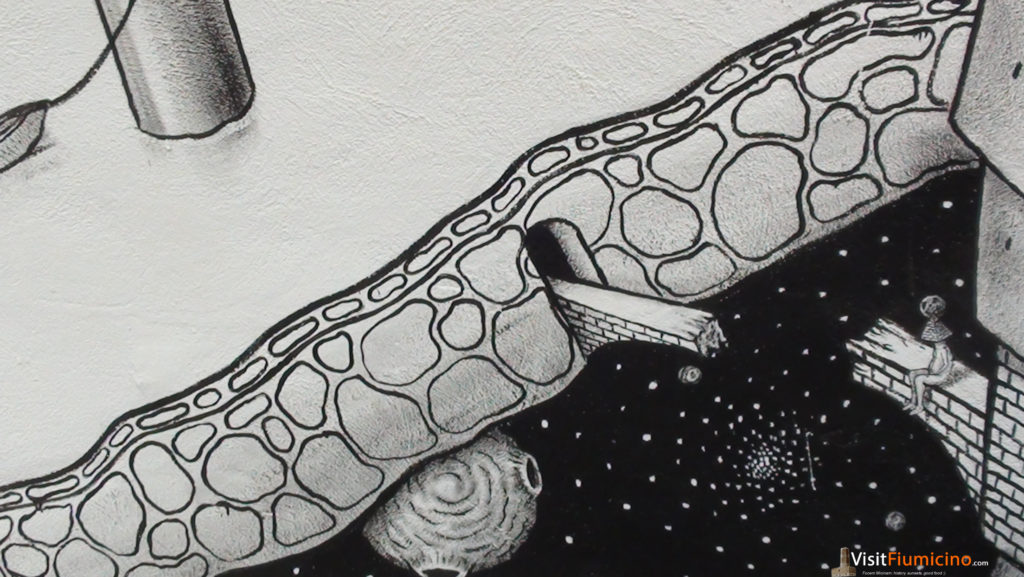 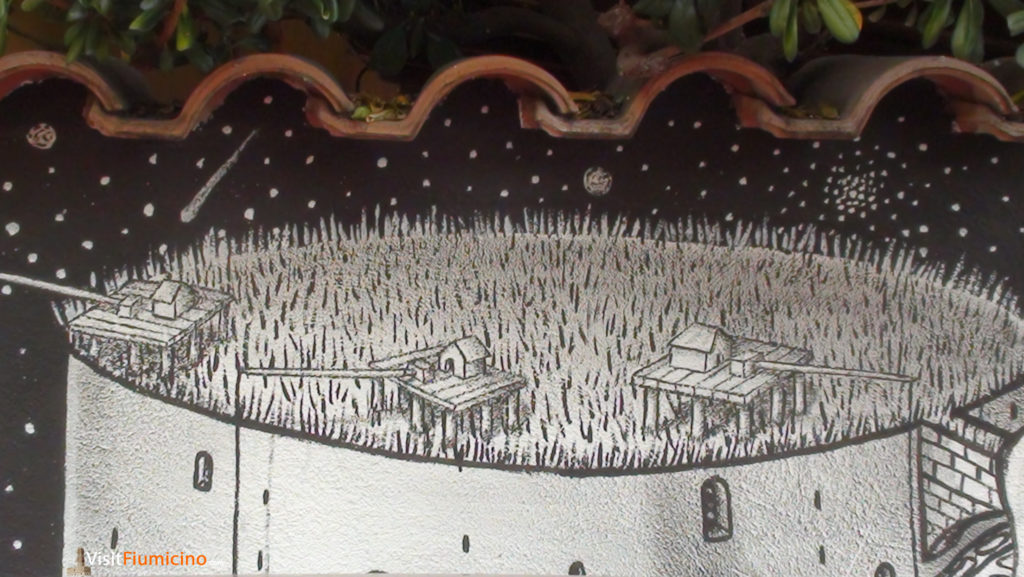 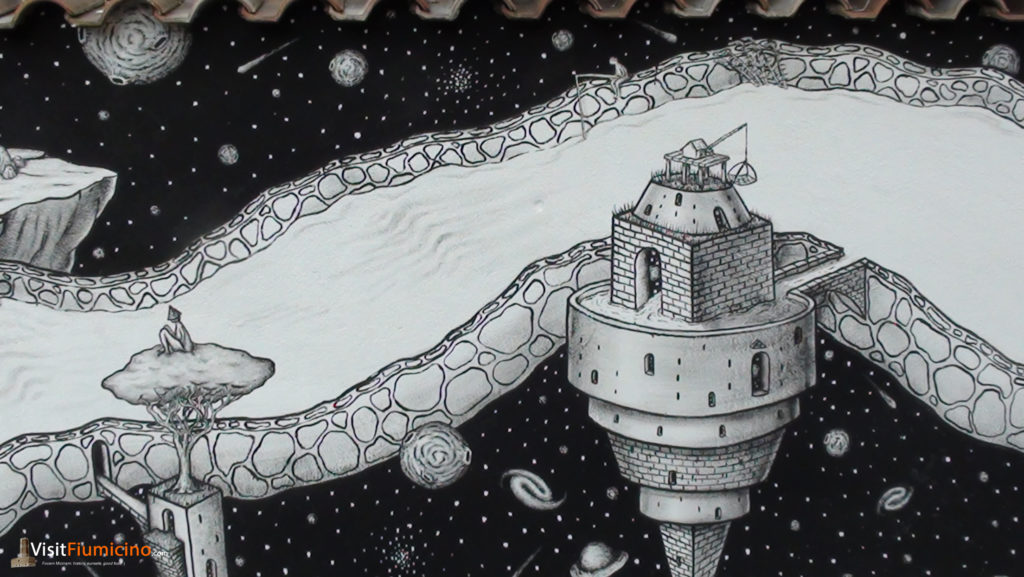 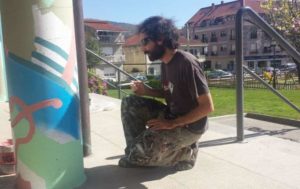 Peri Helio (Vigo, 1983) is a self-taught artist, he graduated in mathematics and astronomy.
He began his career closely linked to street art and public space.
His first steps in the world of art began in 2000. Around 2005, he achieved a language all its own, which defines his current style. From then on, he begins to develop his particular universe – dreamlike, amazing and full of symbolic associations that permeates the whole of its work.
Peri is based on a complex and varied imagination, that has established a close link between his personal experiences and his artistic interests. Thus, both geometry and Astronomy are deeply rooted in the metaphorical vocabulary of his work. In his compositions, personal, intimate organic shapes and geometric mingle with some surreal and symbolic suggestions.
Peri is a Visual philosopher of the human condition. With a great environmental awareness, is an observer of nature and the changes inside. All these features are clearly reflected in the creative process of the artist.
Nel corso della sua carriera, ha partecipato a un gran numero di mostre individuali e collettive in Galizia, Asturie e Isole Canarie. Il suo lavoro è stato pubblicato in diverse riviste, apparendo anche sulla copertina di CROA Magazine (http://croamagazine.es/). E ‘stato anche incluso nel libro dell’editore Lunwerg: “Los nombres esenciales del Graffiti y el arte urbano español” ( “I nomi essenziali di graffiti e street art spagnola”). Inoltre, ha preso parte a diversi
eventi e festival d’arte, come ad esempio DesordesCreativas (http://certamedesordescreativas.blogspot.com.es/). Nel 2013, è stato selezionato per il concorso Novos Valores, di Pontevedra ( Spagna) (fonte: http://laspondasalmastra.blogspot.it/).

You can admire this artwork via Sernaglia della Battaglia.
Grazie Peri, Gracias Peri 🙂