Stroll through an enchanted forest and cursed in Torrimpietra 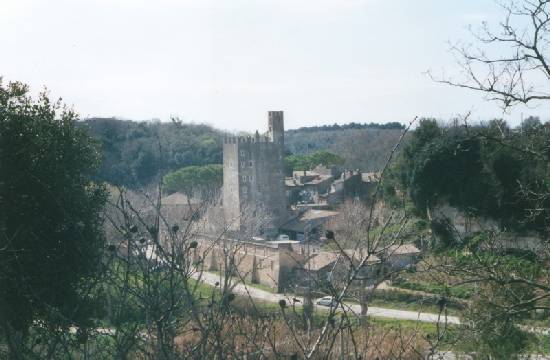 Walking in the countryside and in the Woods by a road on the edge of the village of Torrimpietra, there is high, isolated on a small Tuff spur, the Tower of which was Romper (before the attributed this name) real Turris in Petra so designated by the medieval geographers; its current name (since then the name was attributed to the castle we treat) is related to the legendary figure by a factor of Falconers principles: The romper.

Romper was a man with magical qualities: friend of ninety-nine goblins, on a night they had built with the ninety-nine springs of the Torrimpietra, a tower, in which the same Romper took up residence. Around the Tower, on the same night had planted an olive grove.
Although this may seem enough already, he also had another extraordinary dowry of enchanted the beasts. The animal became more rebellious and ferocious mansueto once approached by romper.
With the security that inspired the magical skills, romper, capovaccaro, picked up the challenge of Pocaciccia boldly, swineherd mountain area. According to the notice circulated on the order of Prince Orazio Falconieri, la tenzone asked the two contenders to tame two bulls angry and aggiogarli for pulling a plow. The winner would be the one who traced the furrow longer and straight.
Romper was so confident of winning that vowed in front of Prince Horace leave beautiful beloved Kavi, and saddle and bridle, from which emanated the power to domesticate the animals, who loved her, if he had been defeated.

Pocaciccia proves a terrible rival. Romper security gradually fades and anxiety of losing does go wrong. Pocaciccia wins the challenge, to the surprise of all and with great shame to Romper
Romper, humiliated, moves away from everyone for his abode, adjust forget the promise made to Horace. Arrived at torre discovers with despair that the Kavi has abandoned for Prince.
Out of sorts through the Romper and campaign hides his saddle and bridle, the latest precious things that remained: according to a popular belief, oral buried the magic Saddle (Babar) in the forest that surrounds the estate, casting a curse on anyone who went into the Woods. Still, loggers, hunters and asparagari fungaroli, systematically avoid venturing in "sacred" Woods.

With its irresistible attraction, romper enchants all the animals that come in droves from him. How crazy he heads to the storm at the sea, in which plunges inviting animals to follow him. Invoking desperately, v Kavitha-Mage wins the reluctance of beasts with one last terrible call. Seeing it disappear in waves all animals extend into the water affongando together with him.
The revenge of Playsuit is so accomplished: the Prince who took away the sweet lover, paid with the loss of the animals of his possessions. Not a bird sings, not a dog barks. An unnatural silence and surrounds the estate left to Torrimpietra.
La torre ancora oggi è lì, su una collina, da tutti chiamata Torre di Pagliaccetto.