Fiumicino has started a revolution in sustainable and integrated mobility for some years now with the project of creating a network of buses, trains, boats and cycle paths that can connect every point of its extended territory, remember that Fiumicino is the 5th municipality of Lazio by extension.

Since 2020 Fiumicino has equipped itself with a new local public transport system by establishing a partnership with Trotta Bus Service.
Now there are 15 bus and minibus lines that connect every locality of the territory often going as far as the borders of the municipality of Rome (Ostia and Fiera di Roma for example).

These lines are also integrated with some cycle paths and train stations currently present in the area: Airport, Leonardo Park, Palidoro, Maccarese/Fregene.

In addition, a line connects Isola Sacra to the Lido Nord stop of the Roma-Lido train (future Metro E). 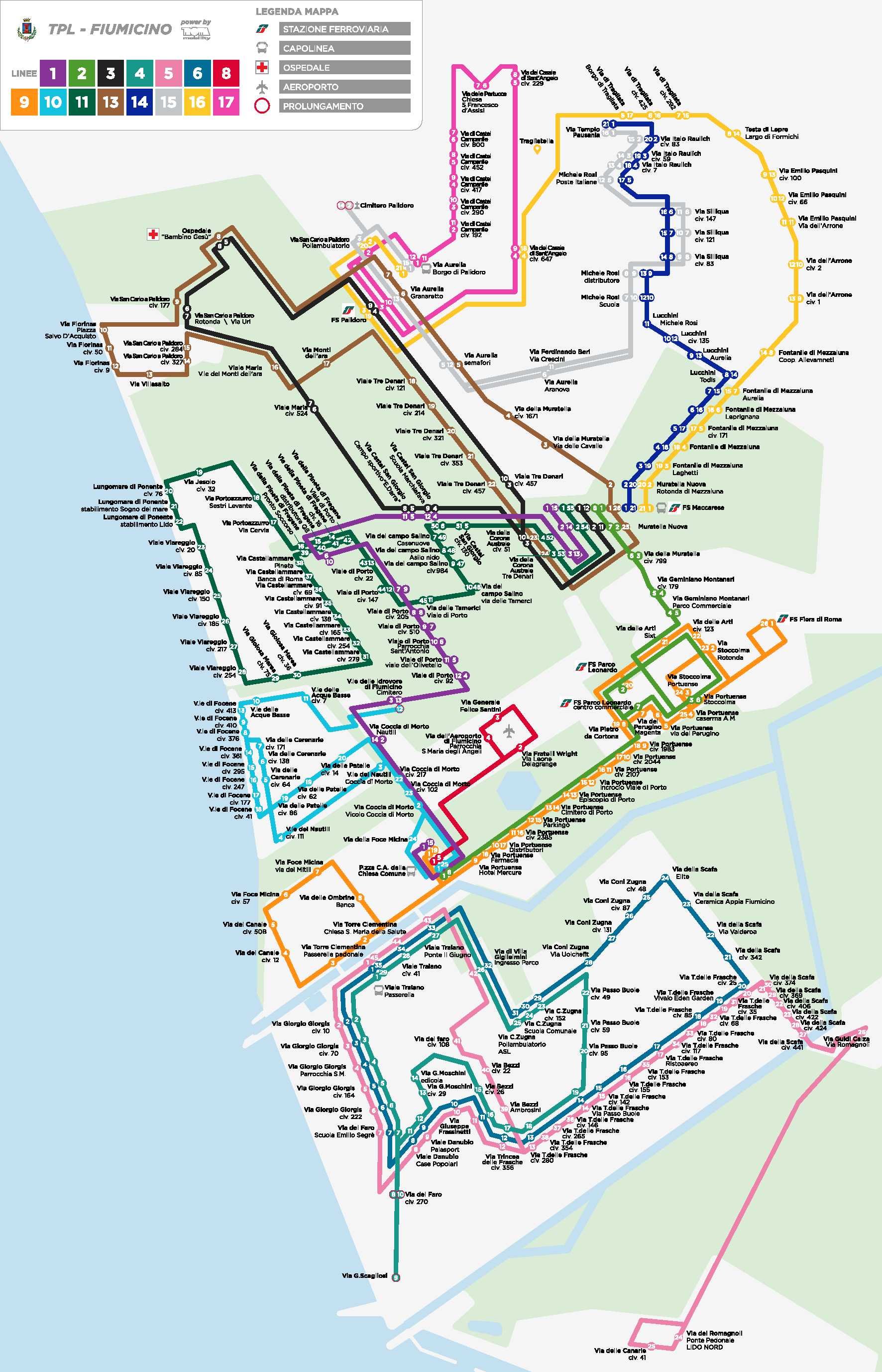 The buses are equipped with GPS and interface with the TimePro platform of Moovit, the famous mobility app, so users will be able to know in real time where a bus is and how long they will have to wait at the stop.

But not only that, electronic schedules have been installed in the main bus stops to be able to consult in real time the times of the buses that pass through that stretch. 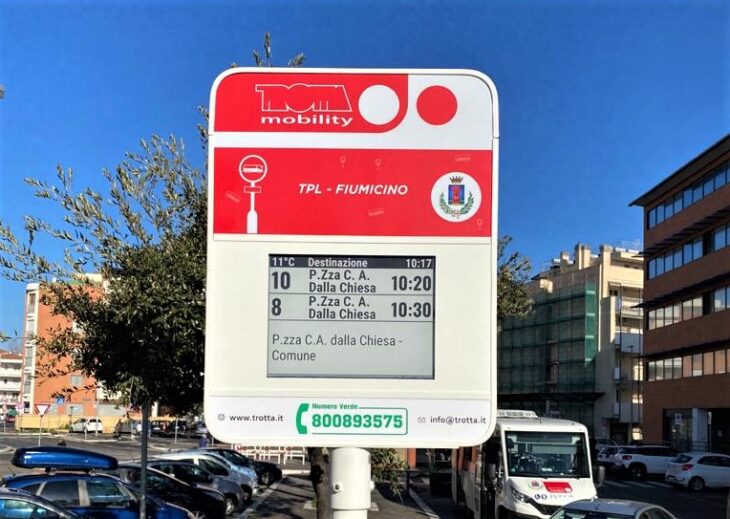 Each bus is also equipped with a platform for disabled people and wheelchairs in order to facilitate users and increase the accessibility of vehicles.

The cost of the ticket is 1 euro for 90 minutes while the monthly subscription on the entire network costs 23 euros.

In the territory of the municipality of Fiumicino there are 4 stations of the FS (waiting for the future station in Fiumicino city): Fiumicino Airport, Maccarese/Fregene, Leonardo Park, Palidoro.

Frecciarossa lines pass through Florence, Bologna, Padua and Venice at the airport station.

It is indisputable, however, that the absence of a station in Fiumicino città is a problem that must be solved as soon as possible, without this in fact the project of integrated and sustainable mobility of the city seems truncated. However, there are several projects on track.

In the recent Mobility and Transport Plan of the Lazio region it has been decided that there will be an extension of the Roma-Lido to the Rome Fair, fiumicino airport and fiumicino city.
Work will start by 2023 and will be financed both directly from the region and from certain PNRR funds.

Integrated and sustainable mobility is one of the main features of our municipality: the desire, in line with other European cities, is to allow citizens to move freely throughout the municipality without ever taking the car and safeguarding the environment.

Already today many citizens move on two wheels both using the existing cycle paths, and using dirt roads within the vast municipal area. Currently in the territory of the municipality of Fiumicino there are about 40 km of cycle paths but there is an extension plan that covers each territory and that above all connects all these cycle paths with each other and with the local public transport system.

The weekend then Fiumicino becomes a destination for many lovers of two wheels who coming from Rome travel the different routes that connect the capital to the sea, for example the Queen Cyclarum, using dirt or even the city's bike paths.

Some of these slopes are really suggestive, such as the track on the Tiber river park that connects Fiumicino to Parco Leonardo.

But also the beautiful track on the lungotevere of Fiumicino. On the right the sidewalk decorated with marmi and planters, on the left the bike path next to the road and parking lots. All separate and protected. Here are some shots to tell our bike paths: In the stalls of via coccia di morto a large exchange parking lot and a hub for many bus lines in the city is being built that will also have a bike sharing station and a bike path that will take you directly to Fiumicino airport.

Since June 2021, the sharing project of electric scooters has started in all locations in the area together with 3 of the largest companies in the sector: Helbiz, Bird and ItalPack Urgent Post Service.

These are 450 scooters located in each territory in a proportional way. 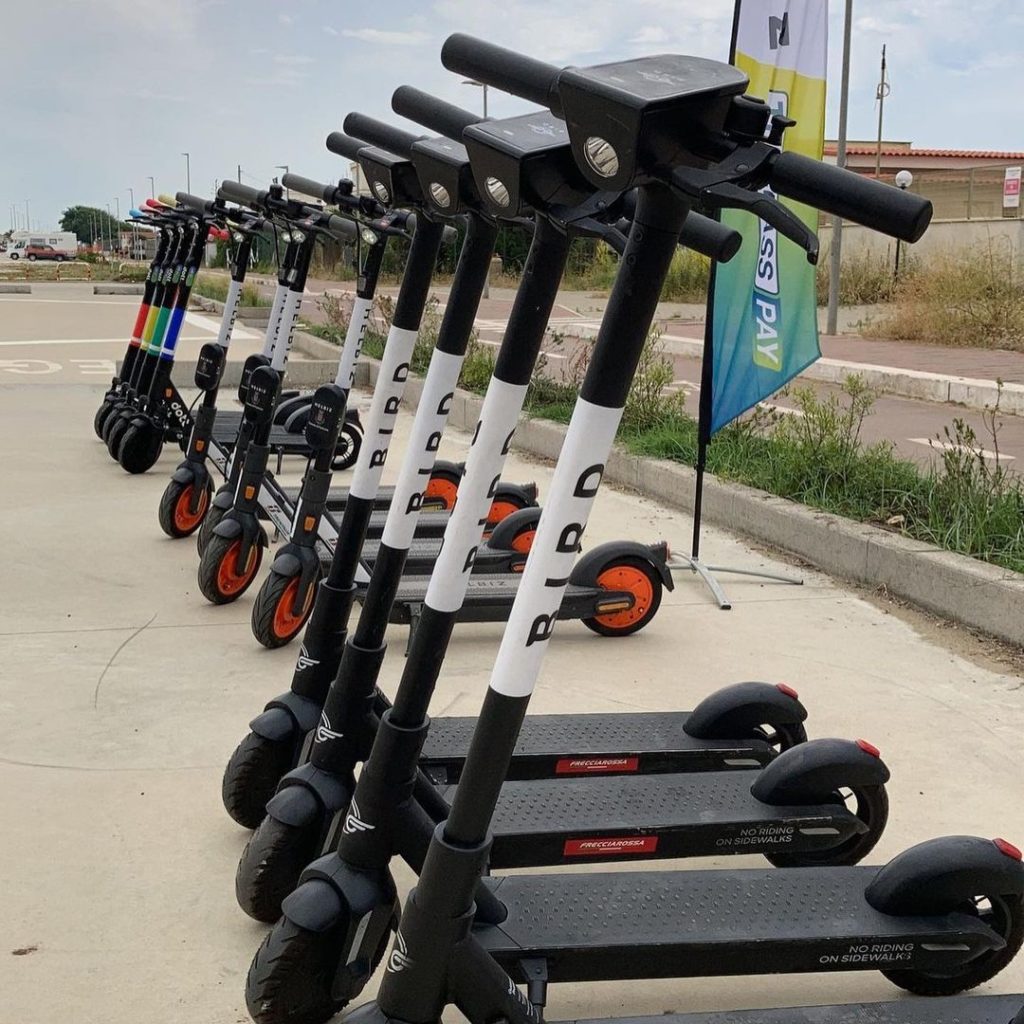 We tell the service through the words of the Councilor and Vice Mayor Ezio di Genesio Pagliuca:

From today we will have a new 24-hour service in the seaside resorts and that we hope to be able to reschedule also in other areas of the territory.

The service will cost no more than 25 cents per minute.

As soon as the works of the cycle paths are completed, this service will be further expanded with special connections to the reference railway stations of the Municipality, such as Parco Leonardo, Maccarese and Palidoro. A project and a service that is in addition to the great work on local public transport and mobility carried out by the Councilor Paolo Calicchio We obviously recommend the utmost caution in the use of vehicles, in compliance with the rules of the highway code and safety in general

Each company will provide a specific app and related costs, this is the summary table:

A small video to show in 30 seconds how you can book, use and park your scooter

A few kilometers from Isola Sacra and Fiumicino is one of the main European intercontinental airports, Leonardo Da Vinci.

Winner in the last years of different awards as the best European airport,

the airport is also facing a green evolution to become a totally sustainable and environmentally conscious airport.

And it is connected to Rome thanks to the FL1 line (which crosses the city and reaches Orte, on the border with Umbria) and the Termini Express that connects it directly to termini station

’Within the recent PNRR the project to make the Tiber navigable has also been included.
A series of electric-powered boats will connect the future port of Fiumicino city to Rome, a route of about 60 km immersed in history and nature.

There will be several routes along the way: fiumicino, Ponte Marconi, Tiber island, Duca d'Aosta bridge until you reach castel giubileo, in the north of Rome.